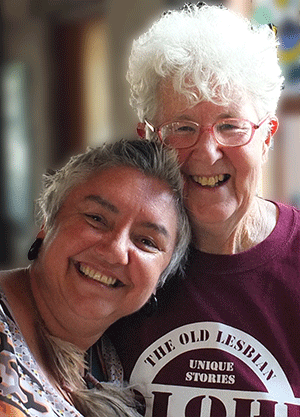 The launch of Lesbians Ignite! In Victoria In the 1990s at the Brunswick Neighbourhood House in Warr Park, 43a De Carle Street, on Saturday 30 April 2016, surpassed all my expectations and then some. For me, singer songwriter Lou Bennett, formerly a member of the musical trio Tiddas, was the undoubted highlight of the event. She opened the proceedings by acknowledging we were on the land of the Wurundjeri-willam people and welcomed us to the land of the Kulin Nation from her perspective as a Dja Dja Wurrung and Yorta Yorta lesbian. And later launched the book from both a personal, (Lou and I met at the first Lesbian Festival in Melbourne in 1990 and have been friends ever since), as well as a political point of view because Lou, as she said, benefited from the burgeoning of lesbian culture during the 1990s which features in the book. During the speech Lou sang two songs, Koori Woman and Sister, both appropriate to the occasion and much appreciated.

The other highlight was the performance by nine members of the Performing Older Women’s Circus who gave us a colourful and energetic display of their acrobatic and balancing skills to the tune of Helen Reddy’s I Am Woman and to the delight of the audience of approximately sixty people. At the end of their performance they then invited all of the ex-POW members up on stage for the traditional Age Line, a particular favourite of mine, where we called out our ages from the youngest in POW to the oldest ex-POW who happened to be Pat Rooney at 81.

Ardy surpassed herself as emcee, introducing the acts with amusing anecdotes and laugh out loud story telling and in between she read extracts from Sarah Yeomans’ centre piece in the book, Melbourne: A Cornucopia of Lesbian Delights: ‘Our quasi lesbian centre at 25 Plant Street went from strength to strength. We were contact dykes in the US mag Lesbian Connection. The 500 cards cohort met there. We ran monthly soup nights, Ardy the principal organiser, at which lesbians sang for their supper, recited poetry or otherwise performed. I can think of one brief romance which ensued over the washing up, but will name no names, as romance is possibly too strong a word.’

I thanked everyone who’d contributed to the book, Sarah for her story, Meg Irwin for her front cover photo of bees and BookPOD for typesetting and printing, as well as Lou, POW and Ardy for making the launch such a significant occasion and Pat Mitchell for taking the photos on the day. I also read some of the Introduction: ‘These gatherings of dykes from all over Australia, and some from overseas, have been critically important occasions. Not only for a sense of bonding across the vast ‘tyranny of distance’ that makes it very difficult for the national lesbian community to communicate and exchange information and ideas. But on a personal level they have enabled to lesbians to gain a sense of pride in ourselves and our diverse lifestyles.’ Ardy and I finished with a small rythmic performance, Act / Don’t Act Your Age.

The cheese platters proved popular as everyone started arriving at the beginning as were the pavlovas and chocolate ripple cake at the end. Many books were bought from Ardy and signed. A special thank you to everyone who was able to attend and contribute to making the launch such a festive occasion and particularly to those who also bought a book. Thank you also to Liz, Christina, Melissa, Judy and Annie who helped with the setting up and cleaning up at the end. Some of Pat’s excellent photos of the launch can be viewed on the Dyke Books website, www.dykebooks.com.It’s especially pleasing for me, after many years of writing, that the third book of the Archives Trilogy about the Women’s Liberation Movement and radical lesbian feminist activism has been successfully launched and is available for sale through bookshops or borrowing at libraries or by emailing dykebooksinc@yahoo.com.au.

Journey Into My Underworld, by Jo Alexander, published by Long Breast Press