Now that we have launched Lesbians Write On: A Celebration of Contemporary Australian Lesbian Writing, the Long Breast Press collective would like to encourage everyone to buy copies of this anthology not only for yourself but also for your friends, lovers and family to enjoy. At a mere cost of $20 per copy (plus $5 postage for one or $14 for two or more anywhere in Australia) it makes an appropriate and affordable gift.

We would also like to thank once again all those who have attended our book launches and especially those who have already bought one or more copies of the book. Your invaluable support has not only been encouraging for those of us on the LBP collective who have worked hard over these past two years to bring the book to fruition but it has gone a long way towards boosting the writing morale of the contributors.

Not only that, but each purchase helps us to cover the considerable publishing costs and any surplus left over will go towards helping to publish LBP books in the future.

Lesbians Write On is an eclectic collection of literary pieces through the eyes of 24 lesbian authors in Australia.

With the use of poetry, prose, fiction or non-fiction writing styles, a diverse range of topics touching lesbian lives is explored.

Topics like, being a radical lesbian feminist, love, lesbian gatherings, the fear of losing a lover, lesbian activism, dealing with racism, ageing as lesbians, interactions with biological families and much more.

In short, what it means to live as a lesbian in Australia today.

It follows in the footsteps of numerous lesbian writers and publishers who, over many decades, have contributed to shaping lesbian communities by giving voice to the unique experience of lesbians in a changing world.

The Long Breast Press collective is proud to be part of a long tradition of nurturing a lesbian feminist community through written and published words.

Willing Up and Keeling Over is a practical handbook to help us with those financial, emotional and legal details when a lesbian lover or friend is faced with death.

It covers a wide range of topics such as wills, powers of attorney, preparing for dying, arranging funerals/cremations or dealing with grief.

The information given in this book helps lessen the impact of our own eventual death or the death of a loved one on lovers, friends and family we leave behind.

What makes this book special is the inclusion of our own heartfelt personal stories, art and poetry.

A must read for any lesbian who not only treasures being in charge of her own life, but who also believes in her choice of dying with dignity and in peace.

She Who Sails Into the Wind, sculpture and photo by Lorraine le Plastrier, cover design by LBP Collective 2007

Esther’s Nine Lives is the auto-biography of Esther Olivares, a Chilean lesbian who survived being shot and traumatised by the Chilean military under the Pinochet regime and who escaped to Australia in 1977.

In this book Esther carries us along through her eventful life in Chile and Australia. A life that would have left most people a quivering mess. Yet she emerges, despite her justifiable anger at the many insults and bullets fired at her, as a joyous survivor. She keeps relishing life and nature and sharing that enjoyment with us.

If you are interested in lesbianism, feminism, South America, surviving persecution, indigenous cultures, migration, travel or the spiritual regeneration offered by nature, you will treasure this book.

There are several purchase methods available for the LBP titles.

And don't forget to leave your name with the deposit so we'll know who it's from and let us know by email, as above, where to send the book.

Long Breast press are proud to announce the launch of their latest project: 'Journey Into My Underworld" by Jo Alexander. 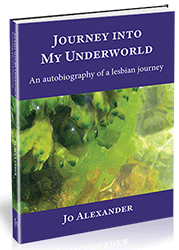 The late 1960s and early 1970s were times of great societal and political change in Western Europe, but in particular in progressive Holland (The Netherlands).

In this book, Jo takes you into her personal experiences of those times while the sexual, political and religious revolutions were raging around her. Her journey into her sexual identity was not an easy one; lesbianism was invisible, homo- and lesbo-phobia was everywhere, and religious Roman Catholic repression was rigid and fearsome.

Courageously Jo describes her journey into sexual taboos, from the inside out, and about being a girl, compulsory heterosexuality, and the lesbian sexual experience. She describes her internalised fear, implanted by her Catholic upbringing, and the devastating effects of being judged and exiled. Jo also writes about joy and liberation and of her love for women in general.

Claiming her lesbian identity was a peak experience in more ways than one.

For a copy of this great book, contact Margo at this address: baubina55@gmail.com